A  recently completed a $2 million capital improvement project aims to attract more cargo to one of the nation’s largest inland ports.

Situated 153 miles from the confluence of the Ohio and Mississippi Rivers, the Port of Indiana-Mount Vernon connects the Ohio River Valley region’s agriculture, coal and manufacturing industries to the rest of the world via year-round access to the Gulf of Mexico and Great Lakes through the inland waterways system.

Each year, more than 3,600 barges, 160,000 trucks and 37,000 railcars typically pass through the port, moving approximately 5 million tons of bulk commodities and general cargo – more than any other port in the state of Indiana.

Recent upgrades including a new concrete floor and an overhead gantry crane at one of its 40-year-old general cargo terminal facilities are geared toward steering steel barges to Port of Indiana-Mount Vernon, port officials are hoping.

Wilzbacher says the “megasite” is one of the largest green field industrial sites available at a public port in America’s heartland. “The area is well-suited for a steel production facility because of the direct waterway access to two U.S. coasts, five Class 1 Railroad connections and major highway and interstate access creating substantial logistical savings,” he says, adding, “The port has over $20 million of existing infrastructure and capacity to accommodate such a facility.”

“Additionally, the port is home to 13 businesses that are recognized as innovators in their respective industries, including transportation, grain merchandising and processing, coal transloading, ethanol production, fertilizer and cement distribution, minerals processing, cargo handling and more – many of which are complementary to the steel industry,” Wilzbacher says.

“The overhead gantry crane is the key component of the general cargo terminal that would support the operation of a steel company, as its capabilities and features are ideal to handle steel coils,” Wilzbacher says. “Key requirements [when ordering the crane] included quality manufacturing, upgrades in electrical components and the capabilities of transloading cargo between any combination of barge/rail/truck/warehouse.”

The new electric-powered crane manufactured near Milwaukee, Wis., by Zenar Corporation and assembled by Mount Vernon-based company TMI Mechanical Contractors spans 75 feet, has a 60-ton lifting capacity with twin, 30-ton hoists, and can travel the full length of the site’s 790-foot crane way.

It will be operated by long-time port company and general cargo terminal operator Consolidated Terminal and Logistics Company (CTLC) to load and unload general cargo between barge, rail, truck and warehouse.

The new 53,000-square-foot concrete transit shed floor installed by southwest Indiana company Rivertown Construction in early 2019 can sustain load-bearing capacity to accommodate the maximum weights of any general cargo. Wilzbacher says the new floor brings the 40-year-old facility to a “nearly like-new condition”, and could even be expanded to more than 200,000 square feet if warranted.

“Our terminal updates will also help enhance the Mount Vernon port’s capabilities in handling container-on-barge shipments,” Wilzbacher says. “We are looking forward to new opportunities for our current and future companies.”

The upgraded general cargo terminal is currently fully operational, and terminal operator CTLC and Ports of Indiana are jointly marketing the facility to expand services by developing container-on-barge shipments to handle both domestic and international shipments using the inland waterway system in addition to steel coil shipments scheduled for the balance of 2020, Wilzbacher says. Inquiries to handle super-sacks have been received as well as project cargo shipments, he adds.

“The next generation of the general cargo terminal will certainly carry the port to another 40 years,” Wilzbacher says. 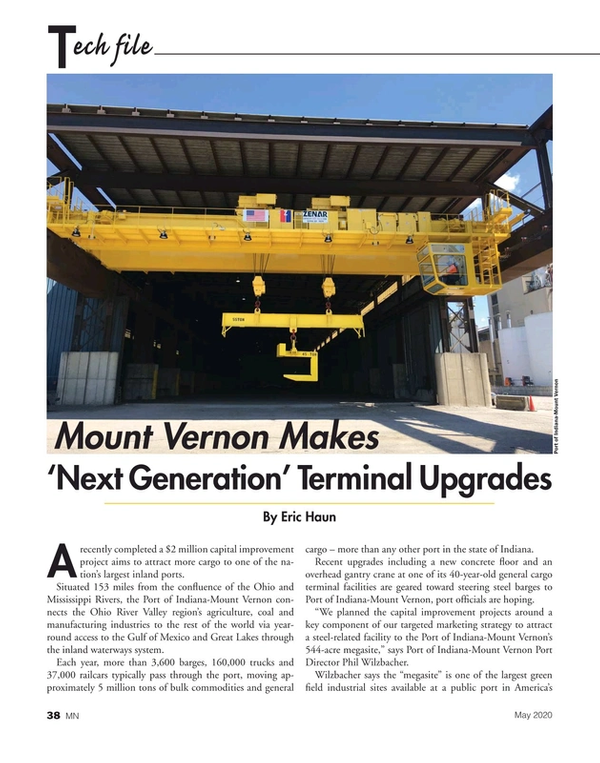 Read Port of Indiana-Mt. Vernon Makes ‘Next Generation’ Terminal Upgrades in Pdf, Flash or Html5 edition of May 2020 Marine News

Other stories from May 2020 issue

Marine News is the premier magazine of the North American Inland, coastal and Offshore workboat markets.